The LNSC under the Ejigbo Local Council Development Area of Lagos State has on Tuesday called on the leaders of the NURTW to provide a commercial bus driver who killed one of its officers.
The commercial bus driver who has said to have knocked one Nsude Chika, through reckless driving around 1:30 Pm at Iyana Ejigbo Bus Stop, fled away from the scene of the accident while he discovered that officer gave up the ghost.
An eye witness who pleaded anonymously said the victim died on the spot, he also confirmed that the late Nsude was actually knocked than by the fled away commercial bus, he also noted that the driver was driving against traffic.

The eyewitness said the driver ran away with his passengers after knocking the victim under a moving trailer.
In his reaction to the sad incident, the Head of Administration, Ejigbo LNSC, Rasaq Makanjuola stressed that the accident was caused by one of the members of the NURTW, who was chasing the commercial driver for refusing to give him money.
Makanjuola stated that the leadership of the NURTW must arrest its worker, the  Agbero and also produce the killer driver.
Makanju further stated that the accident occurred as a result of an attempt by the bus driver to escape from the Agbero, which prompted him (driver) to take one way, and in the process hit the unsuspecting LNSC officer who was riding on his bicycle to his duty post. 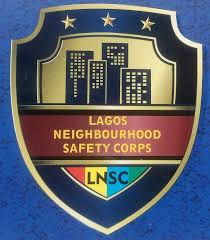 “The sad news is that he was knocked down by LT bus plying one way and knocked under the trailer. It is disheartening that no official of Lagos State Traffic Management Authority (LASTMA) nor the police could pick the bus plate number nor arrest the driver till he ran away with passengers in the bus.” He said.
Mr Omokayode Adeoye, who is the LNSC Corps Superintendent for Ejigno LCDA also called on the leadership of the NURTW to as a matter of urgency fish out the killer driver,  he confirmed that the remains of the victim had been evacuated and deposited in the mortuary at Isolo General Hospital while the investigation was ongoing to fish out the killer driver.
Facebook Comments