Home Lifestyle You Are A Greatest Friend, Ally, Supporter At Difficult Times – Tinubu...

What Tinubu Said To Oluremi On 60th Birthday.

Tinubu stated that “today I thank God for her life, “I am very happy for her on the attainment of 60. We give thanks to God Almighty that has spared our lives and preserved our love together.
“This moment when Nigeria is 60, my wife is also 60. It’s a wonderful thing. We mark the day with soberness. Soberness because many people pray to live to see today but they could not. The pandemic has taken away some of our friends, those close to us.
“Today, some people are still lying critically ill in the hospital. Some children have become orphans as a result of what is happening around the country. So it’s a sombre celebration on the occasion of her 60th. 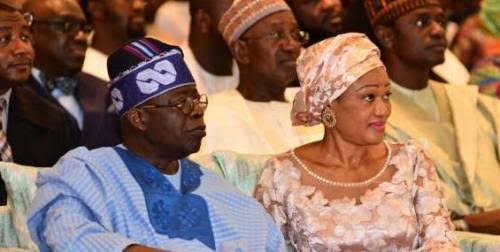 For, Nigeria, turning 60 is also a moment for reflection about all that we have been through and where we are”. Tinubu said.
Tinubu also in his speech said that  “We are a living symbol of love, care, perseverance, and commitment. There are so many moments, many twists, and turns in our lives.
“You know, during the dark days when democracy was assaulted in this country, we suffered a lot, the family suffered. As a result of that, she was in America while I was crisscrossing Europe.
“She was raising our children all by herself. It was a very trying period for every one of us. And then, we endured and got through all the turbulence and today we are still in positions to serve our nation, to serve our people.
“You can go around the entire Lagos and particularly, the Lagos Central Senatorial District. There are so many that appreciated her commitment, her humanitarian care for both young, the elderly, and the needy.”  Tinubu stated.
Facebook Comments

How My Wife Saved Me From Committing Suicide – Prophet Iginla Reveals