The All Progressives Congress has received N100m for the presidential form of ex-President Goodluck Jonathan.

According to reports, a serving governor credited APC Collection Account domiciled with Heritage Bank, with N100m.

The account number of the party with the commercial bank was stated as 5600007616.

Heritage Bank, in a letter dated May 9, 2022, notified APC of the receipt of the amount.

The bank’s letter was addressed to APC National Organising Secretary and was co-signed by Heritage Bank Regional Head in Abuja, Daniel Oniko; and the bank’s Experienced Center Manager, Isaiah Ediae.

It read, “We write to confirm that your subject account has been credited with the sum of N30,000,000.00 (Thirty Million Naira Only) being Expression of Interest form for Goodluck Ebele Jonathan for Presidency.

“Please take this as a credit advice of the transaction in this regard.”

A second letter also from the bank informed APC of the receipt of N70m for the Nomination Form for Jonathan.

Jonathan, who reportedly became an APC member last year, joined the long list of over 35 aspirants that have picked up APC 2023 presidential forms whose fate would be decided at the party’s convention by end of May.

Recall that Jonathan will only be joining APC presidential race on the condition that he is endorsed by the President, Major General Muhammadu Buhari.

Jonathan served as Bayelsa State deputy governor and governor before he became Vice-President and President on the platform of the Peoples Democratic Party from 1999 to 2015.

In February, some northern emirs had reached out to the former President, asking him to contest. Jonathan had also stayed away from activities of the PDP, including the last national convention.

Former Governor Sule Lamido of Jigawa State had also stated that it was unlikely that Jonathan was still a member of the PDP as he was no longer involved in the party’s activities.

Last month, posters of the ex-President flooded the national secretariat of the APC on Blantyre Street, Wuse 2. Youth and women groups had also demonstrated outside of Jonathan’s office in the Maitama area of Abuja.

The demonstrators, who arrived in five large buses, held up placards some of which read, ‘Jonathan, Please Run’, ‘Jonathan, do the needful’, ‘Jonathan for 2023’, ‘Jonathan Declare Now’, and ‘Goodluck Please Come Back, We Love You’.

Jonathan subsequently invited the leaders of the protesters for a private meeting and said he was not sure if he would run. He, however, asked them to ‘just watch out.

See Photos Of The form payment Letter And Receipt Below; 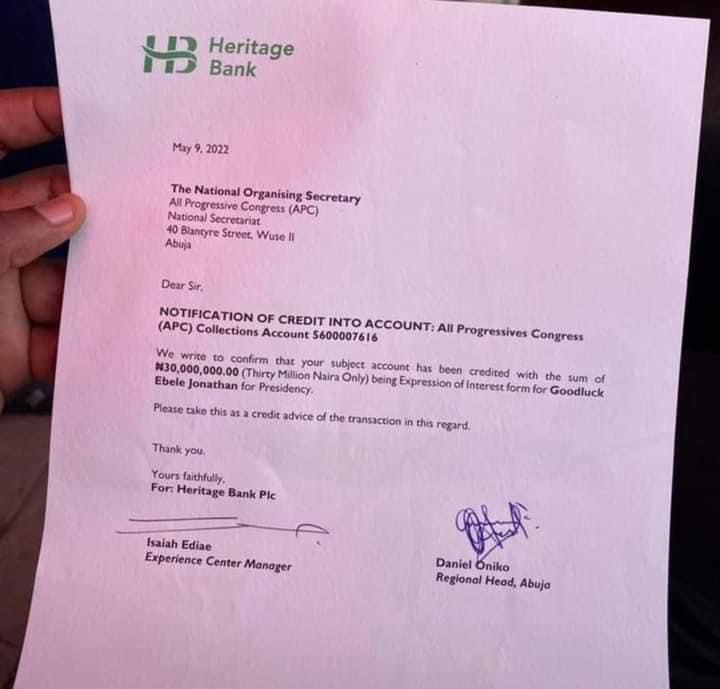 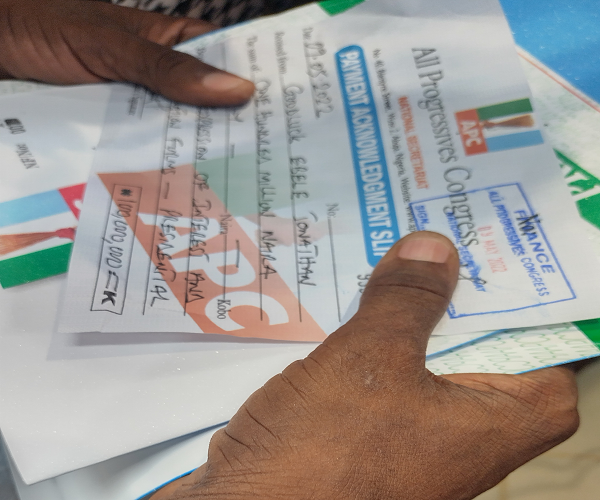 All Set For Saraki’s Coronation At PDP Presidential Primary

Watch Video As Stolen TV Gets Stuck On Thief’s Head