Popular Nollywood actress, Toyin Adewale said that she knows everything about her son’s music.

News Rain learnt in a recent interview granted by the veteran Nollywood actress, where she spoke about the music career of her son, Mayorkun.

According to her, she knows every detail of the song composed and sang by his son.
She said: “I know all my son’s music from A to Z, word for word, I know his songs very well, I follow and monitor him all the time. In fact, if he has the power to send me out of Instagram, he would have done that since, because I am always on his page every day, I recently told him I want to join Insta story he said ‘no’, that Instagram was okay for me.”

More so, when she was asked how she feels being the mother of a superstar (Mayorkun), she answered:’It makes me proud and I am happy about it, I never knew Mayowa will go into music. He used to be a junior choir master while in the choir, but never knew he would go this far because he has always been a very quiet, easy-going person. He is not a loud guy, but you know God’s ways are not our ways, so when he started, I became very happy and proud of him.”

She, however, went further to advise every parent whose children want to go to the entertainment industry.

“First and foremost, they have a lot of work to do. They should allow their kids to follow their dreams and at the same time, they should follow them with prayers and monitor them because children of these days always come up with different things. If I show you my phone you will see different pictures that I screen munched from his page, once I see anything unusual, I snap and call his attention to it, he will be like a mummy, please give me a breathing space. I would say no ooo, I monitor him always. So, any parent, who wants his/her kids to go into the entertainment industry, should be prayerful and be their guide.” She said 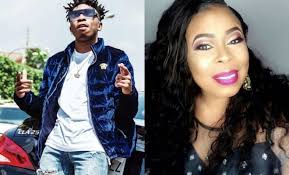 Mayorkun whose real name is Mayowa Adewale is the first child of three, born into a family of entertainers. His mother is a Nollywood actress and his father, an artist and movie producer. Mayorkun was part of the choir at a very young age where he, according to him, “learnt the rudiments of music”. He has a degree in accounting from the University of Lagos and was in a banking job before he was discovered in 2016.
Mayorkun decided to leave his bank job to search for another due to bad pay, when his cover video was spotted by Davido in February 2016.

Davido followed him on Twitter and Instagram, after which Davido asked him if he can do more than play the keyboard. He got a call from Davido the same day he wrote his resignation letter and sent Davido some of the songs he already recorded. Davido decided to sign him to Davido Music Worldwide. Mayorkun released his first single under the label called “Eleko” in 2016. The video of the song gathered a million views in the first 10 days.

Don Jazzy Finally Reveals Why He Is Not Married