Basketmouth whose real name is Bright Okpocha has ventured into music.

News Rain Nigeria gathered that the prominent entertainer after over twenty years in comedy and filmmaking career has opened a new vista in his career with a 9-track visual album Yabasi which means Onions in the Igbo Language.

News Rain Nigeria further gathered that it is the official soundtrack for his forthcoming comedic sitcom, Papa Benji.

The album is an instant melodic feast, which is heavily crafted as a fusion of highlife, Hip-hop, and Afro-pop, largely notes on human living conditions for the average Nigerian, motivating hope in the listener.

From the first highlife-heavy track, Peppersoup, which features the veterans Duncan Mighty and Iceprince, to the feel-good hi-pop (highlife/hip-hop) melody on Oxlade’s and ShowDemCamp’s Myself, traveling through to the Phyno and Flavour’s gyrating ‘Papa Benji’, pre-climaxing with the enigmatic Cavemen and Bez’s duet, and then balancing with the Peruzzi and Illbliss’ record, the songs centrally inspire and sketches facets of the daily struggles of the average Nigerian – the ultimate hustler’s playlist.

Some other songs focus on the beauty of love and positive interactions such as the Waje and Ladipoe’s Ride or Die, which re-surfaces Waje to the music scene with her enchanting vocal melodies that complements Ladipoe’s poetic songwriting. The Chike, Zoro, and Play’s (Basketmouth’s younger brother) trio’s party-starting record is a compelling song on the sound piece, reflecting on love as well. 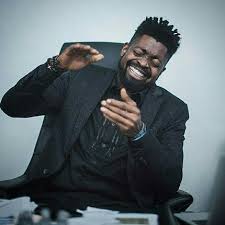 It will be recalled that Basketmouth has organized popular stand-up comedy concerts like Basketmouth Uncensored across the globe.

He hosted a comedy challenge on Instagram, called the #TwoThingsChallenge which sparked an uproar from fans, after a young fan posted a video of him saying obscene things relating to sex, with a child in close view in the video.

In 2005 and 2006 he won the National Comedy Award and the awards for Best Stand-up Comedian of the Year. Basketmouth appears in the Africa Magic show ‘My Flatmates’ (2016). He recently hosted Nigerian Billionaire Femi Otedola in his home